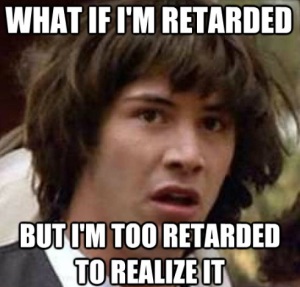 According to a psychological research we’re not very good at evaluating ourselves accurately. In fact, we frequently overestimate our own abilities Researchers have a name for this phenomena, the Dunning-Kruger effect. Two psychologists, Dunning and Kruger, have no life, discovered that we judge ourselves as better than others.

When psychologists Dunning and Kruger first described the effect in 1999, they argued that people lacking knowledge and skill in particular areas suffer a double curse First, they make mistakes and reach poor decisions But second, those same knowledge gaps also prevent them from catching their errors.

Here’s an example that makes me laugh:

When the researchers studied participants in a college debate tournament, the bottom 25% of teams in preliminary rounds lost nearly four out of every five matches But they thought they were winning almost 60% WIthout a strong grasp of the rules of debate, the students simply couldn’t recognize when or how often their arguments broke down

There’s nothing to do with ego by the way. When people spot their deficit, they admit their incompetency.  That’s why people with a moderate amount of experience or expertise often have less confidence in their abilities. They know enough to know that there’s a lot they don’t know.

Here’s the tip for not being a victim of this effect: Ask for feedback from other people, and consider it, even if it’s hard to hear and more important, keep learning. The more knowledgeable we become, the less likely we are to have invisible holes in our competence

The BEST PROVERB EVER:

When arguing with a fool, first make sure the other person isn’t doing the same thing